Posted at 11:06h in Uncategorized by Kies Wines 0 Comments 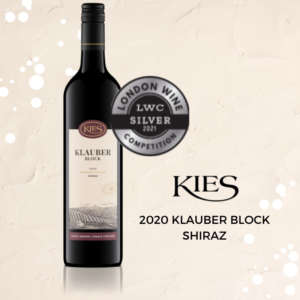 VINEYARD: The Klauber Block vines are 70 years old and are set on a variety of soils adding complexity. From Sandy loam to Biskay to Clay, the soil varies as the slope undulates.

The Klauber Block is Rod and Spur pruned and minimal intervention vineyard practises are used to allow the true varietal character to shine.

HARVEST: The fruit was harvested in the cool of the night when the Baume levels were around 14.5. Our winemaker Bronson Kies determined that the fruit was full of flavour but retained some great natural acidity.

PROCESSING: Upon harvest the fruit is tipped into our receival bin with dry ice to prevent oxidation before being destemmed. Our automatic sorting table then removed extra green matter (around 5kgs per tonne).

During fermentation the cap is pumped over twice per day. The process consists of pump overs as well as automatic gentle irrigation for up to an hour in the afternoon and again in the morning.

Once the wine reaches zero Baume it is pressed in our state of the art Europress to remove the skins. During this process dry ice is used to prevent browning and oxidation. The fruit was then inoculated with a neutral yeast strain and then 24 hours later, LAB is cultured and added to the wine matrix.

The wine was fully through malolactic fermentation 10 days after primary fermentation finished. The ferment was purposely let to spike at 25°C and then cooled down to around18°C for a 14 day fermentation.

Dry ice was used initially before fermentation started and was producing its own CO₂. The longer cooler fermentation is achievable because the winery has ample tank space, resulting in a big bold Barossa Shiraz with loads of complexity.

Once the Shiraz was malo and sugar dry, it went into a mixture of American and French oak hogshead barrels, including 40% new oak. The wine was topped every 4 weeks, during the 20-month maturation time.

Prior to bottling the wine was cross-flow filtered before bottling. The wine was then carefully blended, with tens of bench trials to achieve a powerful but balanced wine with a long finish. 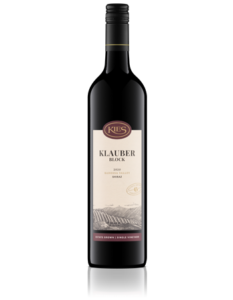 HISTORY: Made from the older more mature vines of the Kies Estate, the fruit has been specially selected to provide the complexity and excellence required to maintain its incomparable reputation. This sensational Shiraz produces good richBarossa lift, with an abundance of fruit mid palate, with quite a dry finish.

The Klauber Block Shiraz will grow with time in the cellar.